You are here: Home / Reviews / Brick or Treat Party Nights at Legoland California!

Last week we had the opportunity to attend Brick or Treat Party Nights at Legoland California! This was our first year attending the halloween inspired event, happening Saturday nights in October! The Not-So-Spooky activities included a dance party, costume contests, nighttime trick-or-treating on the Brick-or-Treat Trails, holiday inspired music, a light show and the entertaining “Boo Crew”!

We were welcomed through the gates by a giant Lego pumpkin, where guests had the opportunity to climb inside for a fun photo opp! The party started at 5pm, which is when the park usually closes and we were excited to see the park at night. Only certain areas of the park remained opened, however all of the rides within those areas were open and we literally walked right on. We were all thrilled! 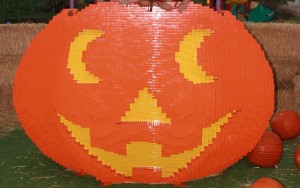 Two Brick-or-Treat trails were available and one opened earlier than the other. I was disappointed to find out that you could only go through ONE Brick-or-Treat Trail (NOT BOTH) and when the kids were turned down at the second trail, I was a bit perturbed, to say the least. Kids don’t really “get” why they can’t go through both and I thought it was a bit of a #fail on Legoland’s part, especially since they have SO many wee ones that just don’t get it and I saw a few who were quite upset. It is important to note that this was the only downfall to the Brick-or-Treat Party and I would still gladly attend in coming years. 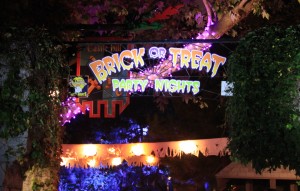 I was impressed by the “treats” that Legoland gave out including bags of Baked Lays Chips, Lego Bricks, Lego Magazines and activities, a FREE Chipotle kids meal at any location in San Diego and minimal candy. Our dentist will certainly thank Legoland on our next visit!

There were loads of halloween themed decorations throughout the park included Lego ghosts, Lego witches, pumpkins and more! There were also a number of characters walking about and many who were on stilts (see picture below).  WOWZA!

We had a fantastic time enjoying the park at night and relishing in the many halloween decorations and activities! We were able to ride a large number of rides and both the kids and my husband and I really enjoyed that.  We will certainly attend next years festivities and I hope that ALL of the Brick-or-Treat Trails will be open to guests!

What You Need to Know…

– Brick-or-Treat Party Nights happen each Saturday night through October and the party is from 5pm to 9pm!

– A separate event ticket is NOT required! Akk Brick-or-Treat Party night festivities are included in the price of a regular one-day admission to Legoland California.

– Trick-or-Treat “goodies” are only available on the Brick-or-Treat trails and you may only walk through ONE trail during the party.

Thank You to the folks at Legoland California for providing us with tickets to the event.