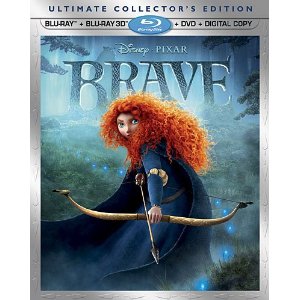 You can now order this Brave (Five-Disc Ultimate Collector’s Edition: Blu-ray 3D / Blu-ray / DVD + Digital Copy) for just $26.99. This is with the $8 coupon available on Amazon

This is a pre order as it has not yet been announced when the dvd of the Brave movie will be released. We would guess that it will be some time around early November 2012 as this will just be in time for the Christmas sales. Order now and if the Amazon.com price decreases between your order time and the end of the day of the release date, you’ll receive the lowest price. We would doubt though that the price will get any lower than $26.99 Shipped between now and release so we are ordering ours right now!