Welcome to day 10 of the Bloggy Birthday Bash! Today’s giveaway is sponsored by Jakks Pacific!

We don’t have any boys in our house, but you would think so with the toys that are in it! Big Pea loves trains, cars and action figures, who would have thought? When Jakks Pacific recently sent us the New GX Racers to play with, she was busy racing these little cars all over the house!

What are GX Racers?
GX Racers are the new standard of insane speed and amazing action! This line of 1:64 extreme vehicles features interchangeable gyros that race up to 600 scale MPH to create awesome performance! The GX Racers line includes: 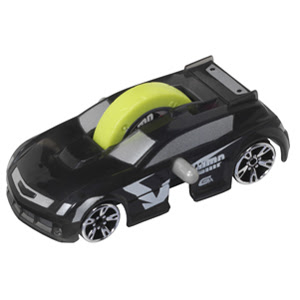 What we think….
We had the opportunity to try out the GX Turbo Launcher, GX Stunt Pack & a GX Speed Assortment!

The GX Speed Assortment comes with 1 car, a speed gyro and a rip cord. The rip cord is inserted into the car and when you pull it out, it sends the GX Racer flying across the floor!

The GX Stunt Pack includes a car, a stunt gyro and a side spin stunt accessory. The Side Spin accessory allowed Big Pea to place her GX Racer on a platform and the GX Racer spun around really, really fast. She got a big kick out of that! 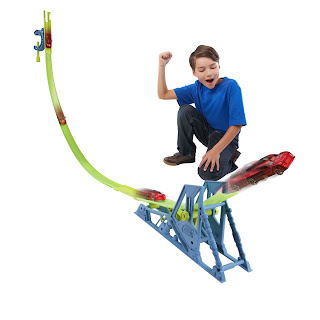 The GX Turbo Launcher is a motorized launcher that can be used by itself or with other track sets (sold separately). The GX Turbo Launcher allowed Big Pea to rev up her GX Racer (it really sounds like an engine) and when it launched it went faster than I have ever seen a little car go before! It was really, really cool! The only problem was, we couldn’t find enough floor space to accomadate the speed of these little cars. They have so much power behind them, that they will go for quite some time.

The Gx Racers line will be a sure hit this Christmas and would make great stocking stuffers! For those of you with boys, this is a fun, exciting toy that will not only bring your little one’s enjoyment, but mom and dad will want to join in too. My husband and I were both on the floor playing with the GX Racers!

Buy It!
GX Racers are available now at your local Target, ToysRus, Walmart and Kmart stores. You can purchase online now at Amazon

Win it!
The nice people at Jakks Pacific are giving one lucky “Deal”ectible Mommies reader a GX Stunt Set, complete with a car, stunt gyro and stunt accessory! Just visit gxracers.com and tell me what you would love to have out of the GX Racers line!

Note: Stunt pack shown is not necessarily the one you will receive. 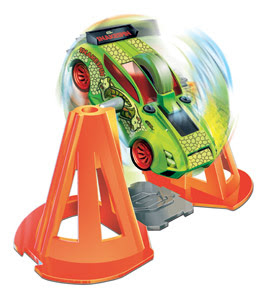 Please remember to leave a way for me to contact you! For safety purposes and so that the spam bots don’t attack you, you can enter your email like this: dealectiblemommies (at) gmail (dot) com.

Extra Entries: The initial entry MUST be done before any extra entries will count!! Each comment counts as 1 entry..so if you qualify for two entries, then leave two comments!!!

4. *2 Entries* Blog about this giveaway or the Bloggy Birthday Bash (please leave a link to the post)

6. *5 Entries* If you commented on the Cozi Post (Thank You btw), leave 5 comments letting me know!

Now don’t forget that EVERY entry into EVERY giveaway during the Bloggy Birthday Bash will count towards the GRAND PRIZE: Anka High Chair by Svan!

Now get to commenting! Good Luck!

The boring stuff: Open to U.S. and Canadian residents only. Giveaway will end on August 28th at Midnight! Winner will be chosen using random.org!