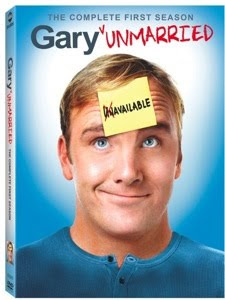 Everything seems unfamiliar for suddenly single dad Gary Brooks (Jay Mohr) as he tries to navigate his increasingly complex life. A painting contractor, Gary is doing the best he can to share the upbringing of his 14-year-old son Tom (Ryan Malgarini) and 11-year-old daughter Louise (Kathryn Newton) with ex-wife Allison (Paula Marshall). Just as he’s trying to figure the etiquette involved in informing his ex of his gorgeous new girlfriend Vanessa (Jaime King), Allison drops a major bombshell on him—she’s engaged to their marriage counselor! Kids, romance and his ex-wife’s controlling ways keep Gary guessing as he gets used to his strange and uproarious new world.

This new dvd, three disc set features 20 episodes that will have you lauging from start to finish and is loaded with Bonus Features including:

– Gary Unhinged: Bloopers From Season One

– The Chemistry Of Comedy – The cast and crew gives an all-access tour of Gary Unmarried.

– Tuesday On The Set With Jay – Spend a day on the set of Gary Unmarried with Jay Mohr.

The bonus features really make this DVD!  Your not only getting the complete first season but tons of extra bonus features for your watching pleasure.  The bloopers are always my favorite part of bonus features and these are laugh-out-loud funny and so fun to watch! Additionally, this DVD offers a behind-the-scenes visit with Emmy Award-winning director James Burrows (Cheers) that is really cool!

This is a really sweet and funny show that incorporates modern problems.  The chemistry between Jay Mohr and  Paula Marshall is priceless and cannot only be seen on screen, but can be seen back stage in the bonus features.  If you have yet to check out this TV comedy, I highly recommend getting familiar with the show!

Buy it!
Gary Unmarried: The Complete First Season is available for purchase at mass retailers nationwide for a SRP of $39.99 (US) and $44.99 SRP (CAN) or you can purchase at Amazon

Disclaimer: I was provided with a copy of the above mentioned DVD from Walt Disney Home Entertainment for my review.  My thoughts and opinons remain my own!