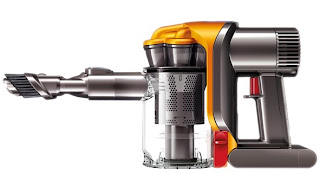 We’ve all seen the Dyson commercials featuring the ever talented James Dyson, who by some form of genius figured out how to engineer a technology that proves to be far superior than that of anything we have seen to date!  Commercial after commerical, I would say “there’s no way that it can be that great”! Well I’m here to tell you that I have never been SO wrong!

We were recently sent Dyson’s newest handheld, the DC31, that incorporates the most power-efficient motor (DDM) ever developed for a handheld and a 22.2V lithium ion battery that recharges up to 3 times faster than others! I have used a handheld for a good five years now, it’s a must when you have little ones.  With kids, comes more messes than any one person could ever prepare themselves for and dragging a full size vacuum out multiple times a day is simply not in the cards, in this house!  I have been so disappointed over the years that handhelds lacked the power needed to actually pick anything up other than small sugar-like particles and the battery’s on these machines are simply embarassing, to say the least!  I know you all are feeling me here!

Well thanks to an amazing team of engineers, who worked over 10 years to develop Dyson’s new technology, the handheld of this mama’s dreams!

Dyson Digital Motor
This oh-so-talented team of engineers developed  the Dyson Digital Motor (DDM) to be faster and smarter, simply put! This technology allows the motor to spin up to 104,000 rpm.  To put that in perspective, that’s five times faster than a formula 1 race car engine and its tiny!  It’s smaller, lighter, more powerful and simply smarter than any other! 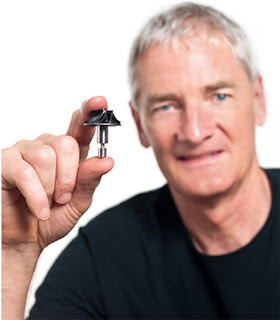 22.2V Lithium ion Battery & Root Cyclone Technology
The lithium ion battery means no fading, a recharging time 3x faster than any other and a 10 minute run time per charge.  Yes, 10 minutes…that’s amazing and much needed in our household!  All Dyson vacuums use “Root Cyclone Technology” which allows the vacuum to separate dirt, debris and fine dust from the air.  This means that it doesn’t lose suction and it gives you the performance you would expect from any vacuum!

Our thoughts…
Lil’ Pea, bless her little heart, is the mess maker of our home, by far!  Anything she can get her hands on ends up all over the house and that means things like rice, when she decides to break into the pantry and climb the shelves!  Did I happen to mention that she is the fastest child I have ever seen?  This kid can break into the pantry, grab a bag of rice and sling it all over the house in about 60 seconds flat!  And you thought you were busy?  So as you can imagine, I was thrilled when theDyson DC31 Handheld Vacuum Cleaner

arrived at the front door!


I immediately gave it a charge which took no time at all and I set out to take it for a test spin, only to be interrupted by Mr. “I can tell you right now if its quality or not”!  Ten minutes later, he was so amazed by the technology, primarily the motor, that he wouldn’t give it up.  I was beginning to get a bit angry, as he was not showing any signs of handing it back over, so I ripped it from the clutches of his amazement and let him know that this was not daddy’s tool!

After my short battle was quickly ended by my sly moves, I put the DC31 to work on Lil’ Pea’s hook-on chair which she had just dumped cereal all over.  Holy Guacamole, Batman!  You want to talk about some serious suction power...the entire bowl of cereal was sucked into this marvelous little machine in about 4 seconds flat….Impressed? Um yea!  The DC31 also features a Dual-Power mode that allows you to press a small button on the back of the unit and the handheld is suddenly “Supercharged”!!  We found that the DC31 is a time saver in our car, as I think any parent can attest to the small messes that get created daily in the back seat!  Although the DC31 offers some serious power, it weighs in at only 2.9 lbs, making this handheld lightweight and easy to grab!

With the Dyson DC31 handheld’s function, ease of use, amazing design, exterior appearance and “Holy Guacamole, Batman” suction power, the DC31 is getting two thumbs up from us here at “Deal”ectible Mommies!  I don’t have one complaint, nor do I have any suggestions for improvement!  Dyson simply exceeded my expectations and I think they’ll do the same for you!

Buy it!
The DC31 & DC31 Animal are available for purchase at retailers nationwide and atDyson DC31 Handheld Vacuum Cleaner

Disclaimer: Dyson provided me with a DC31 handheld for my review.  My thoughts and opinions remain my own!