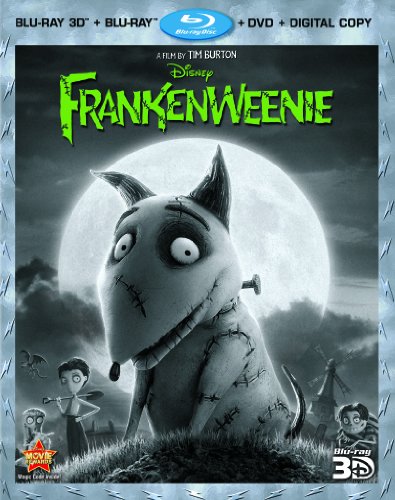 We are looking forward to the release of Tim Burton’s highly rated Frankenweenie movie on DVD. Frankenweenie is based on a movie short which Tim Burton made in 1984. The story is simple. Our young hero Victor is heart broken when his dog is killed. But he has an idea to bring him back to life – the power of science and the legend of Frankenstein.

Here is a trailer for the Frankenweenie movie:

The movie is release on 8th January 2013 and is available now on Amazon for pre order:

We are huge fans of anything produced by Tim Burton (yes even when it doesn’t have Johnny Depp in it)! Frankenweenie is an unusual movie. It is a black-and-white, stop-motion animated film. Not a style you see much of, but this works amazingly well for the Frankenweenie story.

includes an all-new original short “Captain Sparky vs The Flying Saucers”; an exciting behind-the-scenes featurette with Tim Burton “Miniatures in Motion: Bringing ‘Frankenweenie’ to Life”; a showcase of the film’s touring exhibit, “‘Frankenweenie’ Touring Exhibit”; Tim Burton’s live-action short of the same name, and more. We are always big fans of the Combo Blu Ray packs as they give you all the DVDs and great behind the scenes features.

Is Frankenweenie a movie for children? Of course the answer depends upon the child but the recommended age is 8 and up. My 6 year old did enjoy the movie but was rather freaked out by the pet cemetery scene. As always use your discretion and if you have younger children you may want to watch the movie first.

Pre order now and get the Amazon price guarantee. If the price goes down between the time you order and the shipping date you will get the reduced price