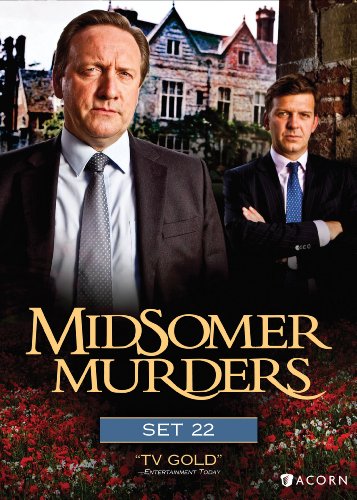 Midsomer Murders is a treat for everyone who loves a detective mystery drama. Set in the quaint but eventful English picture perfect villages of Midsomer County there is never a dull moment. Detective Chief Inspector John Barnaby solves the crimes in his own charismatic way.

If you enjoy British drama you should give Midsomer Murders a try. The plots are clever, with lots of twists and turns along the way. And the scenery is most definitely just how you imagine a proper English village to be.

I have watched Midsomer Murders since it started in 1997 and there have been almost 100 episodes since the start – yes I think I have seen them all. This is very much a gentle, often humorous drama.

Midsomer Murders is available for pre order and is released on 6th August 2013.

The Sleeper under the Hill— Barnaby and Jones investigate a group of Druids in Midsomer Mow.
The Night of the Stag—Local bootleggers come under suspicion after the disappearance of a government inspector.
A Sacred Trust—Vandalism and violence send shock waves through Midsomer’s cloistered nunnery.
A Rare Bird—The detectives investigate whether competition between ornithology enthusiasts led to murder.