We recently had the opportunity to spend four days in Carlsbad, Ca and hang out at Legoland for 2 days while we were there!  Legoland is by far one of our favorite amusement parks and offers numerous rides and activities targeted right our two girls age groups!  This was our second trip to Legoland and the first one ended with Big Pea developing a long relationship with Lego’s in general.  This park is simply magical for the 3-12 age group and I’m not sure what’s more fun for the parents: watching their kids having so much fun or having as much fun as the kids, themselves! 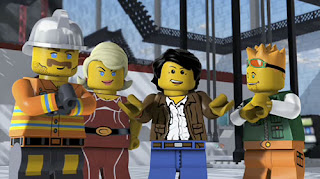 A Clutch Powers 4D Adventure
If Legoland wasn’t already cool enough, they’ve introduced an all new 4D movie at the park: A Clutch Powers 4D Adventure.  Clutch Powers is a new lego character who can accomplish just about anything.  When there’s a job to be done or an adventure to be had, you can bet that Clutch Powers will not only be there but he will reign as the best builder and explorer in all the land and of course he couldn’t do it without his faithful friends!  It’s an action-packed, 10 minute show that will have you grabbing at the air, literally!

As you walk into the large theater, you are handed a pair of 4D glasses for your totally awesome viewing pleasure and then guests proceed to take their seats.  Then…the show begins! But this isn’t just any 4D show, the movie is jam packed with kid-action fun and you find yourself dipping and dodging the objects that fly around in front of you and at you!  Legoland has coordinated the movie to include physical features as well, like blowing wind, lights that look simulate fire and snow in the form of a soapy substance that falls down on top of you as you watch.  It was SO cool!

Both of my girls were completely enthralled for the entire 10 minutes, which was a welcome scene after we had been running around the park all morning.  They allow you to get completely wrapped up in the movie before the physical aspects of the show start to appear, which makes it simply magical and one show you’ll never forget!

A Clutch Powers 4-D Adventure is playing exclusively at Legoland and is located in the Show Place theatre.  Running several times daily, there’s plenty of opportunities to jump in on the 4D action packed movie!  And of course we couldn’t leave Carlsbad without checking out Legoland’s newest attraction: the Sea Life Aquarium! 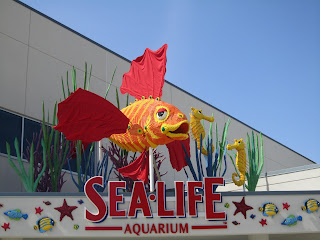 Sea Life Aquarium
Just a short time ago, Legoland California and Legoland Arizona introduced the Sea Life Aquarium, which is located right next to the park at the Carlsbad location!  We spent quite a few hours within the walls of the Sea Life Aquarium and found deep sea lego divers swimming among the fish as well as designated areas where the girls could climb up and touch many of the creatures that live within the ocean.  A close, personal encounter that they would not typically have the opportunity to participate in.  There’s plenty of learning opportunities throughout the aquarium and we even had the opportunity to view a feeding…it was so cool! 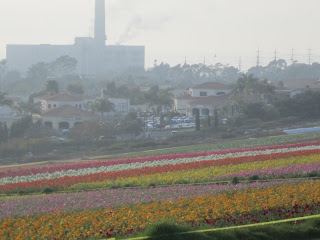 I have to give a quick mention to the most amazing resort I have ever been to, the Grand Pacific Palisades Resort located directly across the street from Legoland California! Our original plans for a hotel fell through and from the moment I contacted the resort they were more than willing to help us in finding a room and enjoying our stay!  In fact the resort was so helpful and so nice, that we ended up staying an extra night because we just didn’t want to leave!  The Grand Pacific Palisades resort offers everything you would dream about in a resort including a Karl Strauss Brewery on site (which we ate at 3 nights in a row), a water park (oh yea), basketball courts, rec rooms and the list goes on and on!  The resort also looks out upon a HUGE field of wildflowers that goes on for what seems like forever!  Our trip was simply amazing and we are already planning our next trip!  The staff really made the stay magical and I have never met so many people that were consistently that nice!  So a big thankyou to them for making our stay extra magical!

A big thanks to Legoland for allowing us to be a part of the new movie launch and for our wonderful days at the park!  We were also surprised by the bag we received at check-in containing the full-feature DVD for our families enjoyment!  My girls were thrilled!  You can purchase your very own copy of full-feature DVD at Legoland or at Amazon

Disclaimer: I was provided with free admission to Legoland California to facilitate my review.  My thoughts and opinions remain my own!

Leave a Reply to The Shopping Mama Cancel reply