On my recent trip to Disneyland for the grand World of Color Premier, I had the opportunity to stay at Disney’s Grand Californian Hotel & Spa!  The hotel itself is inspired by the arts and craft era at the turn of the 20th century and holds architectural details that reminded me of the great works of Frank Lloyd Wright.  Perhaps it was my admiration for the “turn of the century” inspired architecture or the warm glow of the fireplace burning in the background of the lobby that had me in such awe of what was surrounding me… OR perhaps it was the fact that I was hanging solo in a mom’s wonderland of bliss, surrounded by some of my favorite mom bloggers.  Regardless of the reason, anyone would be amazed by the sheer size of the lobby itself and the hotel has the ability to draw you in and  in no time you’ll be kicking up your heels with a sweet “end of the day drink”!  Oh and Disneyland?  Pfff..what’s that?  You mean there’s a theme park that lyes just outside these doors?  Who would have ever thought! 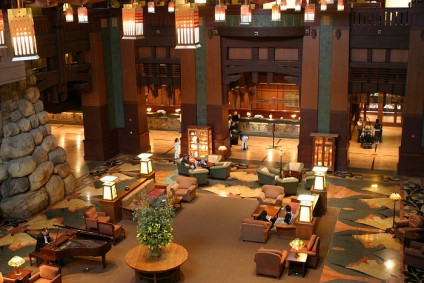 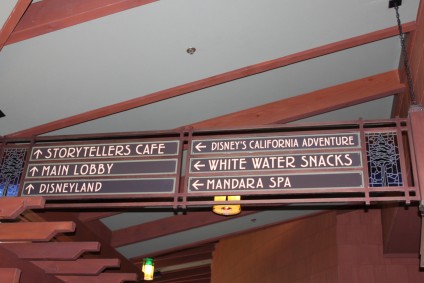 The Rooms
Let’s just say there’s alot of them…944 to be exact and that includes 44 luxurious suites that sweep you off your feet and have you feeling like you stepped into a fairytale!  My good friend and fellow blogger Silvia and I shared a beautiful 2 queen room featuring 20th century design elements, with bits of Disney portrayed throughout.  Our room came equipped with a two-sink vanity area (a feature I loved), a separate bathroom with shower and tub and a lovely patio that overlooked the courtyard.  Rooms come in the following configurations: 1 King, 2 Queens or 1 Queen w/bunkbeds.  The beds I have to say, were quite comfortable and offered plenty of room for both Silvia and I to move about.  A standard room would be a wonderful introduction for a family of 4! Complimentary wireless and wired internet is provided for my your networking pleasure and refrigerators are available upon request. Additonal ammenities include iron/ironing board, hair dryers, robes, cribs, make-up mirrors, in room safe’s and more! 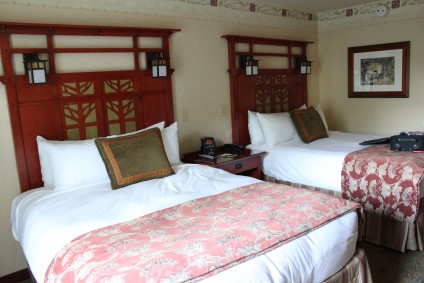 VIP TREATMENT
Staying at Disney’s Grand Californian Hotel & Spa, not only allows you take advantage of the hotels many amenities, but guests will also receive VIP treatment!  Located in the center of downtown Disney, the hotel offers guests a VIP entrance into Disney’s California Adventure park, allowing guests a hassle free way to get inside the park in a matter of seconds!  If that’s not enough, hotel guests wil also be given the opportunity to take part in “Magic Mornings”, giving guests early entry to select Disneyland attractions! 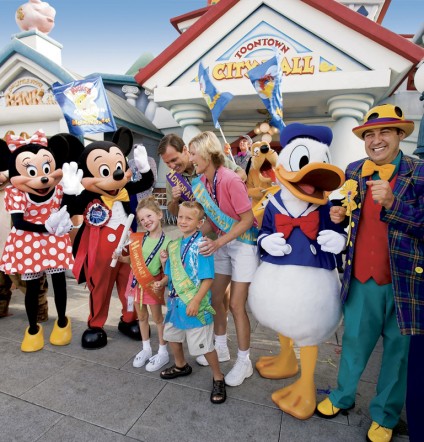 Hotel Services
The hotel offers far too many hotel services to list in just one post, however I do want to point out a few of my favorites:

– Story Time – It’s easy to forget where you are once you step inside the hotel, however it’s important to remember that most hotel guests are traveling with families!  Story time is offered in the lobby at 5:30 and 7:30, for the young or….not so young guests (yes I enjoy story time too)!

– Daily Newspaper Delivery – I HEART my paper and coffee in the morning and I have a feeling that many of you do too!

– Around the Clock Room Service – Yes this is a big perk for me…I like my midnight snack!

– Built with Families in Mind – Family friendly rooms with bunk beds are available upon requests and for those traveling with a large family, sleeping bags with floor pads are also available!

– Complimentary Self Parking – this is a wonderful feature for families traveling on a budget as so many hotels and resorts charge fees of up to $20 a night for self parking!  Valet parkig is also available. 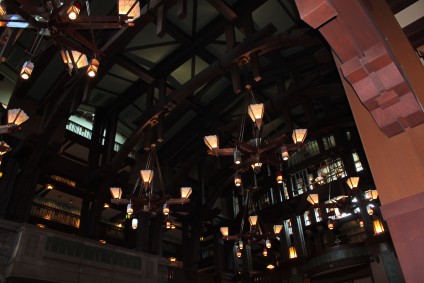 Disclaimer: Disney’s Grand Californian Hotel & Spa provided me with a one night stayto facilitate my review.  My thoughts and opinions remain my own!